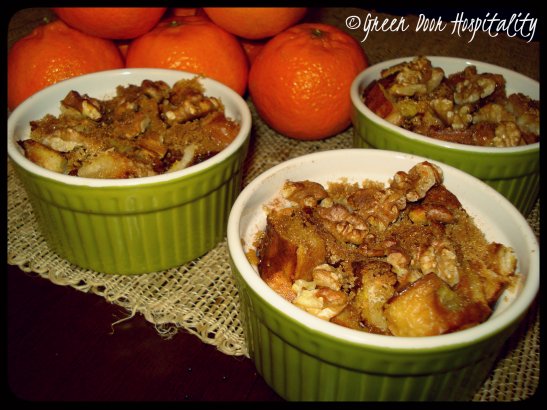 After making Brandied Apple Butter late last year, I started thinking.  Wouldn’t that be delicious to use in a French Toast Bake, like the Pumpkin French Toast Bake that I made?  AND wouldn’t it be a fun brunch idea to make these as individual servings for people to have at their place settings?  So…  I give you Individual Apple French Toast Bakes!  Adjust the recipe to accommodate the number of people you’re serving.  Like the pumpkin version, these are great to make up ahead of time and refrigerate overnight.  Just pop them in the oven the morning of your brunch!

Whisk together eggs, milk, buttermilk, apple butter, vanilla, and all the spices.

Pout egg mixture over the bread cubes.  Push down on the bread with your hands (or a spoon) until it’s all soaked and mainly covered.

Combine the brown sugar and walnuts in a small bowl.  Top the french toast bake with the walnut mixture until evenly coated.  If baking at a later time, cover with tin foil and refrigerate until ready to bake.

Bake for 25-30 minutes, or until golden brown and no longer wet.