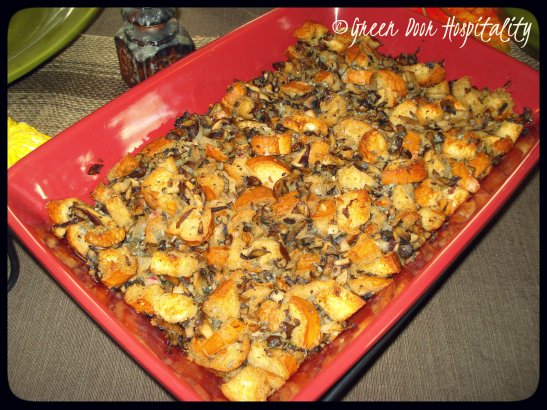 Stuffing is considered a staple of the Thanksgiving meal.  For this year’s ‘Thankful with Friends’, I needed to make sure the stuffing was not only vegetarian, but vegan as well.  So I turned to mushrooms because of their rich, savory goodness that would make anyone forget that sausage was ever part of the stuffing equation.  It also worked out well that Two Little Chefettes had proclaimed mushrooms as the November ingredient for their monthly cooking challenge!

This is the recipe that I developed for our stuffing.  The result was out of this world awesome!  The two mushroom combination with the shallots and the fresh herbs made this a huge hit at our party and definitely a dish that will be made every year going forward!

Lay out an even layer of cubed bread in a jelly pan.  Lightly toss with olive oil, salt, and pepper.  Bake in oven for 10 minutes.  Remove from oven and set aside.

In a medium pan, saute shallots with a bit of olive oil for 5 minutes over medium heat.  Add rosemary and garlic; saute for another 3 minutes.  Set aside.

Saute the cremini mushrooms in olive oil over medium heat until sweating and cooked.  There should be a little bit of liquid in the pan from the mushrooms.  Pour mushrooms and liquid into a large mixing bowl.

Saute the shitake mushrooms in olive oil with the sage until cooked.

Add the shitake mixture to the cremini mushrooms.  Add the shallot mixture and stir until combined.

Pour in the bread crumbs.  Slowly add the vegetable broth, stirring the entire time.  Continue adding the broth until the bread cubes are evenly moistened.  Season with salt and pepper, to taste.

Put stuffing into a baking dish and bake at 375 degrees for 30 minutes.

Enjoy and watch this dish become an annual crowd-pleaser!